Heat races were next up for the Bone Stock, Trucks, V8 Stock and Late Models – 10 Laps 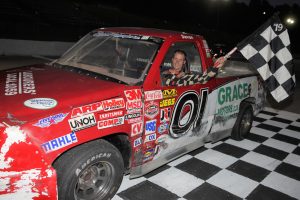 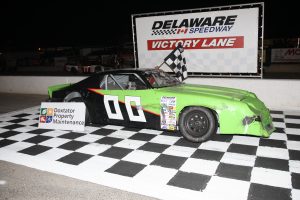 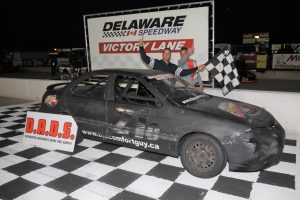 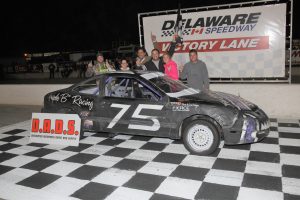 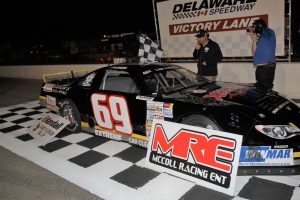 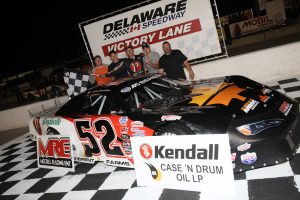 A season high, 20 race vehicles started the 30 lap Feature for the combined Trucks and V8 Stocks. Rookie Cooper Aubertin #28 V8 Stock grabbed the early lead from the drop of the green flag. By lap 3, Points Leader, Barry Watson #45 V8 Stock had moved into second and got by leader Aubertin on lap 5. Red flag flew on the Speedway on lap 7, when Steve Arrand, driving Paul Fothergill ’s #33 V8 Stock and the #71 Truck of Connor VanSteensel got together in turn 2 with a vicious crash, that sent the VanSteensel Truck head on into the 2nd turn wall and Arrand spinning to the bottom of the track. You could actually hear the hit, from the grandstands of the #71 truck hitting the wall. Luckily, both drivers walked away unhurt but the damage to both vehicles was severe. The racing resumed with a caution on lap 10, with oil all over turn 1 and Lucas Manning #66 Truck retiring to the pits for the evening. At the halfway point it was Watson #45, Derek McCullough #00 V8 Stock, the Trucks of Devon Bloemendal #01 and Jacob Campbell #44 in 3rd and 4th and the V8 of Bill Brekelmens #07 rounding out the top five. Watson, McCullough and Bloemendal starting pulling away from the 4th place runner Campbell. With 5 laps to go, the top 3 were ¼ lap ahead of the 4th place runner. When the checker flag flew it was Barry Watson #45 V8 Stock picking up another win, Derek McCullough #00 V8 Stock, the #01 Truck of Devon Bloemendal a very strong 3rd, keeping pace with the front two, Jacob Campbell #44 Truck in 4th and Bill Brekelmens #07 V8 Stock rounding out the top 5. Bloemendal picked up the win for the Truck portion of the Feature.

Jason Lovie #21c and Nathan Rhea #26 led the 24 car field to the green in the Bone Stock Feature. Lovie battled by Rhea on lap 2 to get the early lead and started pulling away from the field. With Lovie in the lead, the battle was for the top 12 positions on the track all in a jamb. With a lot of the top cars buried in a mid pack battle, Lovie, Rhea and the #55 of Craig Cole were extending their lead out front. By the halfway point, Lovie had a 15 car length lead over the 2nd place runner Cole. Rhea fell back into the clutches of weekly top runner Matt Langford in the #03, who took over 3rd place on lap 14. Rhea seemed to slow at this point and dropped back. Second place runner, Craig Cole #55 and Matt Langford #03 starting slowly trying to close the gap on the high flying Lovie. With 2 laps to go, the caution flew with Nathan Rhea #26 spinning in turn 4. On the restart, the positions remained the same for the final two laps with Jason Lovie #21c getting his first Bone Stock Feature win, Craig Cole #55, Matt Langford #03, Kris Lawrence #50 and Shawn Fucile #2 rounding out the top five.

Final Feature of the night was the Season’s Championship – Case ‘N Drum Oil Late Models Presented by MRE. The close points battle between Jo Lawrence #78 and Jake Sheridan #52 was the backdrop of the race. Sheridan had closed the points gap on leader Lawrence, by getting fast time of the evening in qualifications and picking up a Heat win. Piper Adams #70 and Jaden Chapman #13 brought the field down to the green flag. From his inside front row starting position, Adams grabbed the early lead. Caution came out at the end of lap 1 as Stan Adams #3 spun. On the restart, caution came out again with contact between Gary Adriaensen #55 and Jason Lidster # 11, which resulted to Lidster being sent to the back of the field. By lap 2, Jo Lawrence had powered his way into the top spot. Red flag on lap 6, with Tate O’Leary #28k getting into the turn 2 wall and coming back across the pavement, blocking the track. At this point it was Jo Lawrence #78, Gary Adriaensen #55, the 28L of Kris Lawrence, Jaden Chapman #13 and Jake Sheridan #52 rounding out the top 5. At the hallway point of the race the front cars remained the same, with Sheridan having taking over the 4th spot in Lap 17, Sheridan moved into 2nd, behind Jo Lawrence. Lap 21, the caution reappears as 2nd place runner Sheridan, slows with a flat right front tire and heads to the pits for a new tire. Green comes back out on lap 22, with brother Kris Lawrence making a great bonsai move to get under brother Jo Lawrence going into 3 for the lead. At almost that instant, serious back suspension issues on the 28L of Kris Lawrence relegated him to the pits after a strong run. At the finish of 30 laps, the winner was Jo Lawrence #78, cementing his 2019 Delaware Late Model Case ‘N Drum Oil Late Models Presented by MRE. Gary Adriaensen #55 in his strongest run of the year for 2nd, Jaden Chapmen #13 in 3rd, returning driver, veteran Jay Doerr in his newly acquired #43 in 4th and Matt Robblee #51 a strong 5th. 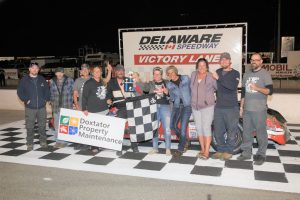 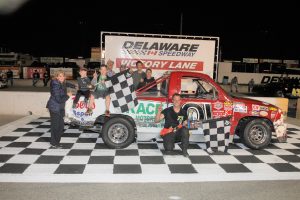 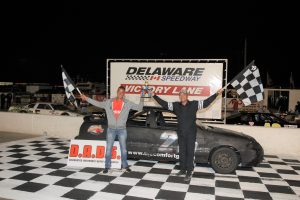 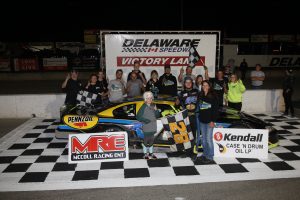 Another awesome night of racing at Delaware Speedway took place as fall is rapidly approaching. We look forward to seeing you next week for an action packed two day program

Make sure you’re at the speedway this weekend, so you don’t miss an opportunity for an amazing two night of racing activities!

All photos provided by Dave Franks