Wild night of racing at Delaware Speedway Friday August 9th, 2019!!  Looking like a “full moon” kind of night as everything seemed to happen, including the first rollover of the 2019 Season. Friday night racing was kicked off with the fans being invited down trackside to personally meet their drivers, get autographs and pictures.  It’s always well received and bridges between trackside and the spectator stands.

Another full field of racers in the pits made an exciting evening of racing.  With the Case ‘N Drum Oil Late Models Presented by MRE, Demar Aggregates Trucks, Doxtator Property Maintenance V8 Stocks and D.A.D.S Bone Stocks all on the card for the evening, made for a full night. 10 lap Heat Races were up for all divisions followed by 40 lap features.

Bone Stock Heat #1 – the #98, driven by David Rockwood won after a torrid battle with Jason Lovie #21c the whole 10 laps

Bone Stock Heat #2 – Brent Pelly #77 edged out Shawn Fucile #1 by half a car length at the finish. The race was red flagged when point leader Kris Lawrence #50 lost a wheel coming out of turn 2 and rolled over on its roof. Both Kris and car returned later in the Feature race

Late Model Heat #1 – Kris Lawrence #28L got his first win in a Pro Late Model over Marc Jacobs #96 Race was red flagged on lap 8, when rookie Piper Adams #70, running his strongest race of the year broke something and rode the front stretch wall, with major damage 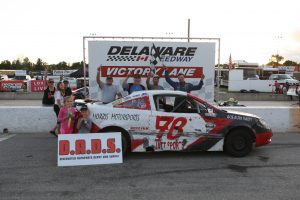 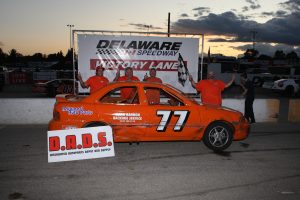 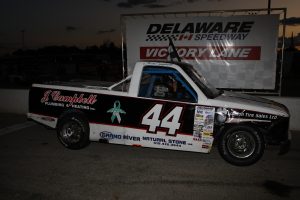 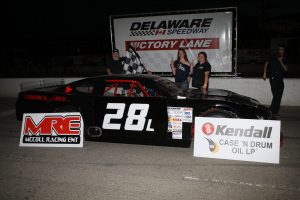 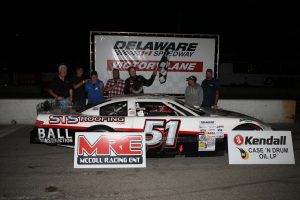 Matt Langford #03 grabbed the early lead and looked extremely strong early. Shawn Fucile #1, making his first Bone Stock start of the year, closed in on the #03 and slipped passed on Lap 5. Langford stayed close as the two pulled away from the pack behind them. They were fighting and scratching for every position in the top 10. On Lap 12, showed the top five being Fucile, Langford, Ebert #87, Pelley #77 and Cole #55. With Fucile and Langford long gone, the battle was on for the top 7 positions. Craig Cole #55 made the first move out of the pack by grabbing 3rd on lap 21. Lovie #21c and Pelley #87 were now battling for 4th, when Lovie finally took over that position on lap 27.  Nic Ramsay in the #07, making his first start of the year in that car, battled on the outside of Pelley #87 and got by for the 5th spot with 6 laps to go. Unfortunately for Ramsey, with 4 laps to go, he headed to the pits with a flat tire.  At the finish it was Shawn Fucile #1 grabbing his first win of the year, with Matt Langford #03 another strong 2nd place finish. Craig Cole #55 was a distant 3rd, with Jason Lovie #21c and Brent Pelley #77 rounding out the top 5

Another barn burner of a feature for this combined V8 Stock / Truck race. Rookie, Ryan Dyson #28 and Lucas Manning #66 led an all Truck front road to the green. Dyson grabbed the lead as the two Truck racers pulled away from the battle going on behind them. By lap 11, the two front runners had built up a huge lead, with Trucks in the first 4 positions. Derek McCullough #00 V8 Stock running in the 5th spot. What a battle was being waged on for positions 3 through 10. Lap 18 showed V8 Stock Points Leader Barry Watson #45 move into the 4th position. Manning #66 started to close in on the leader Dyson ever so slowly with Watson moving into 3rd on lap 22. The 2 leaders had a half lap lead on the 3rd place runner. Caution came out for a spin by Austin Gauld #18 Truck, which erased the huge lead by the top 2. Dyson #28 held the lead on the restart as Watson #45 V8 stock was now close behind. Watson was back flagged for the restart, but another caution flag saved him a trip down pit road under green and he just moved to the back of the field. On Lap 27, Derek McCullough #00 V8 stock made his presence felt as he got by Ryan Dyson for 1st, bringing Bill Brekelmens #07 V8 Stock along with him into 2nd.   With 7 laps to go, the #28 Truck of Ryan Dyson moved back into 2nd and started closing on the leader McCullough. At the checkered it was Derek McCullough #00 V8 stock in his first Feature win of 2019, with Ryan Dyson closing fast in his #28 Truck. Lucas Manning #66 Truck, Lonny Thompson #4 Truck and Connor VanSteensel #71 Truck rounding out the top five.  Ryan Dyson would win the Truck portion of the Feature with a very strong performance and his first ever Feature win.

Another strong field on Late Models, took the green flag for their 40 lap Feature race. Chris Hebert #31 led the first lap before Rookie Marshal Shrenk #22 took over and led lap 2 when the caution flew for a mess in turn 3. In all, 7 cars were involved in varying degrees of damage with top runners Matt Robblee #51 and Gary Adriaensen #55 through for the night. Jake Sheridan #52 took the lead on the restart with Shrenk in tow. A caution on lap 10 for debris, closed up the field once again. On the restart, Kris Lawrence #28L and Jaden Chapman #13 moved into 2nd and 3rd. By lap 16, Sheridan was flying and built up a huge quarter lap lead. Halfway point was Sheridan #52, Kris Lawrence #28L, Jaden Chapman #13, Marshall Shrenk #22 and Ray Morneau #03 rounding out the top 5.   The race settled down  at this point with Lawrence and Chapman battling for 2nd and 3rd.  Chapman tried and tried to get by Lawrence but just couldn’t find an opening.   Race then went caution free until the finish. Jake Sheridan #52, with a commanding lead, grabbed his 2nd Feature win of the year. Kris Lawrence had his best Feature position with a great 2nd place run. Jaden Chapman #13, continuing to impress finished 3rd. Rookie Marshall Shrenk #22 had his best finish ever with a strong 4th and Ray Morneau #03 rounded out the top 5 coming back from being involved in the lap 2 skirmish. 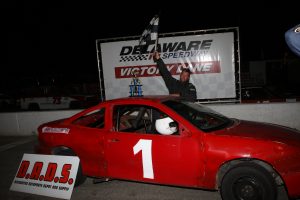 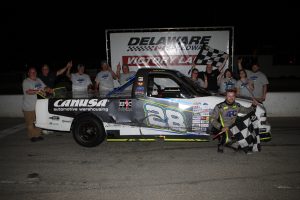 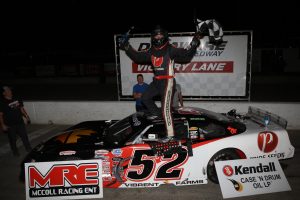