Race Fans, it was an action-packed night at Delaware Speedway’s legendary oval with Racing sponsored by KROWN Canada’s #1 Rust Protection and regular divisions TransAxle Super Stocks, Demar Aggregates Trucks, Doxtator Property Maintenance V8 Stocks & D.A.D.S. Bone Stocks, all on the big half mile. Added Feature, King of the Hill Spectator Racing. The evening was a little cooler which made for a much faster racing surface for all divisions.

Heat races were next up for the Bone Stock, Trucks, V8 Stock and Super Stock 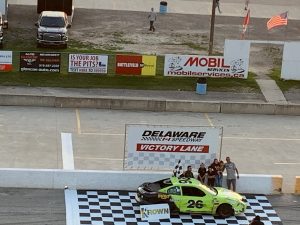 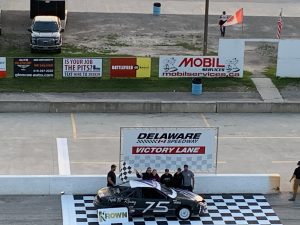 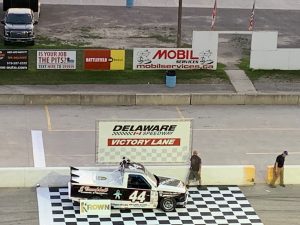 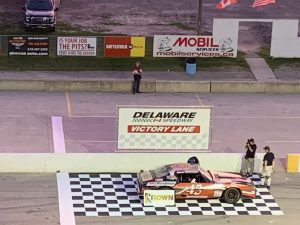 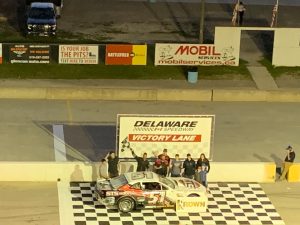 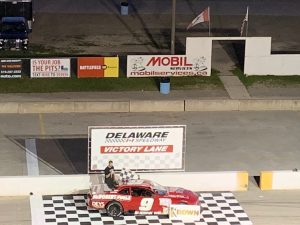 Craig Cole #55 was fast out of the gate and took the lead on lap 1. The order remained consistent during the first 10 laps with hard, side the side racing throughout the field. Current points leader Kris Lawrence #50 was right on Cole’s bumper. Lawrence squeaked by the #55 of Cole on lap 10 and assumed the lead, but with Cole right on his tail. With the two fighting for the lead, Chris Medlinger #75 closed in on the fast duo. Cole was all over Lawrence trying to get by and succeeded on lap 14 after a side by side battle. Medlinger was now pressuring Lawrence for second. With 10 laps to go, it was Cole #55, Lawrence #50, Medlinger #75, Matt Langford #03 and Jordan Morris #73 rounding out the top 5. Cole #55 started to pull away slowly from the second place runner Kris Lawrence. At the finish it was Craig Cole #55 with his second feature win of the season. Chris Medlinger #75 made a bold move on the last lap to take over 2nd position, Kris Lawrence #50 in 3rd position, Matt Langford with another strong top 5 performance in 4th position and Jordan Morris #73, coming back from a crash the week prior to grab 5th

Seventeen Cars and Trucks started the 30 lap Feature for the combined Trucks and V8 Stocks. The #28 V8 Stock of Rookie Cooper Aubertin rocketed out to a strong early lead running very quick. Aubertin and second place runner Steve Arrand in Bill Brekelmens #07 quickly built up a huge lead over the war that was going on behind them. It was a battle for all positions that we hadn’t seen this intense this year. By lap 10, the “Dynamic Duo” at the front had built up to a 20 car length lead over the 3rd place runner,          Derek McCullough in the #00. At the halfway point, Aubertin and Arrand were still in front but McCullough, Kyle Mezenberg #810 and Points Leader Barry Watson #45 were closing in as they escaped from the battle of the pack. Lap 18 had McCullough and Watson getting by Arrand. Watson #45 gets by the #00 of McCullough and sets sail for Aubertin. With 8 laps to go, Watson and McCullough both get by the leader Aubertin who now drops to 3rd position. At this point the Truck of Jacob Campbell #44 is flying and closes in on the leaders. McCullough #00 makes strong moves to get around Watson’s #45 and on lap 27 takes over the lead. Caution comes out on lap #28 with contact between the Trucks of Jacob Campbell #44, Lonny Thompson #4 and the #28 of Ryan Dyson in Turn 4. Thompson was through for the night. On the restart, McCullough held onto the lead and held off Watson to capture his second Feature Win of the 2019 Season. Barry Watson #45 grabbed 2nd place. Cooper Aubertin #28 runs a great race to capture 3rd place. Steve Arrand #07 finished a strong 4th place with the Truck of Lucas Manning #66 getting the 5th position and First place for the Truck division.

Final Feature of the night was the Super Stock 30 lap race. Rookie Derek Moesker #51 out drags Rookie Ryan Bright #45 into turn 1. By lap 5 Moesker had a 10 car length lead over 2nd place runner Bright. The “Big Guns” of the division were starting to make moves to the front, with Rick Verberne #21, David McCullough #39 and the #9 of Andrew Ferreira rounding out the top 5. By lap 12, McCullough, who had got by Verberne gets by Moesker and takes over the lead. He was followed by Ferreira #9 and Verberne #21 moved into 3rd. Trevor Collver #1 was storming through the pack and moved into 3rd place. The order remained the same with Ryan Bright #45 moving back into the top 5 with a late race charge. With 10 laps to go, Andrew Ferreira showed his strength and took over the lead from McCullough. Bright #45, closed in on Verberne #21 for 4th.  At the finish, Andrew Ferreira #9, got his 4th Feature win of the season. David McCullough #39 was a strong 2nd with Trevor Collver #1 grabbing 3rd place. Rick Verberne #21 held onto 4th place and Rookie Ryan Bright was a very strong 5th place finish 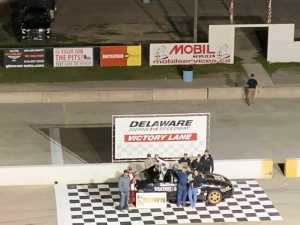 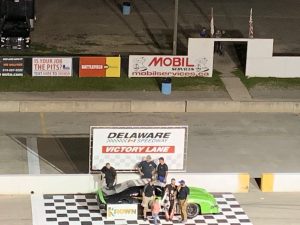 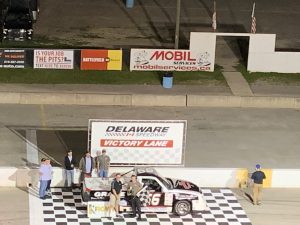 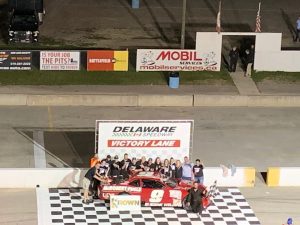 Another awesome night of racing at Delaware Speedway. We look forward to seeing you soon. Join us next week Friday September 6th with the Case ‘N Drum Oil Late Models Presented by MRE Late Model Championship Night, Demar Aggregates Trucks, Doxtator Property Maintenance V8 Stocks, D.A.D.S. Bone Stocks. If you have not made it out this season, get out here. You won’t be disappointed!