Sunshine and Racing! what an amazing combination at Delaware Speedway June 7th

What a Night, if you were not there, you missed an exceptionally exciting fun filled evening of very competitive racing at Delaware Speedway. But know that we will be back racing on Saturday, June 15th so don’t forget to mark your calendar and join us!!

Yes Finally, an amazing race night, with warm temperatures, sunny skies and no threat of rain. The race teams rose to the occasion, the pits were full, some wild, fender banging, close, short track racing for the enjoyment of racers and the great crowd on the Delaware hill. The competition this year is tighter than ever in all classes which, of course, produces some close finishes and fantastic racing during the evening to keep you on the edge of your seats.

After Group Qualifying was compete, the heat races hit the track. First Bone Stock heat went to Chris Radder in the #31 who lead all the way in a caution free race. Bones Stock heat #2 went to Craig Cole in the #55, with terrific tight top 5, who went back and forth several times during the race, exchanging positions. Truck heat race went to Lucas Manning in his #66, with Jacob Campbell #44 all over his tailgate. V8 heat went to Paul Fothergill in the #33 Monte Carlo who took over the lead on lap 7. Lot of beating and banging in that heat race, which was a prelude of what was coming in the Feature.

First Feature: up was the Super Stocks, in their first of two features. The largest (15) field of the season showed why they are one of the best classes in Ontario racing. Anybody’s race for sure. Geoff Chant in his #19 Dodge Challenger led them to green and held the lead until Trevor Collver in his super fast #1 Camaro got by on lap 3. Chant then got stuck on the outside groove, which allowed a four-car train to get by him, dropping him to 6th. Collver, being quick all night opened a commanding 20 car length lead over a tight group of 4 cars all beating and banging in a group. At the halfway point, Collver lead by 25 car lengths and seemed (notice, I said seemed!) to be cruising to a Feature Win. Then the race took a turn. On lap 19, Derek Moesker spun in turn 4, bringing out the caution. Leader, Collver pitted with a flat right rear tire. When the green come back out, David McCullough in his red #39 Camaro led the field. Going into corner 3 from the restart, all hell broke loose. Gary Zwygers #93, having a great run in the top 5 all race, got into the 3rd turn wall and rode the concrete barrier right around to turn 4 in a frightening accident. The #93 never seemed to slow, went up on the wall, finally stopping coming out of 4. The right front of the car was gone, but happily Gary was not injured. Red flag was displayed to clean up the wreck. Restart on lap 20 with the top 3 cars all within a half a second, with David McCulloch getting the win.

Bone Stock Feature: was up next. Chris Radder #31 and Craig Cole #55 leads the 26-car field to green. Cole takes over top spot on lap 2, with caution on lap 4 when Radder spins in turn 4. At that point, David Rockwood #90, in his first Delaware start in 2019, was deemed the culprit of the spin and was sent to the back. Top 3 of Cole, Chris Medlinger #75 and Kris Lawrence #50 pulled away from the field, battling like crazy. Lap 15, Medlinger passes Cole for the lead in heavy traffic. Cole drops to 3rd behind Lawrence, but quickly regains 2nd before the lap was out. Medlinger then pulls away the remaining 10 laps to get his 1st win of 2019, stopping Kris Lawrence’s win streak. David Rockwood #90 ran a terrific race coming from the back after his altercation on lap 4 to finishing 8th in the final rundown.

Combined V8 / Truck feature: was up next and they thrilled the crowd again on this newly combined group (What a Race!). The 2nd feature of the season for this combination, carried on the wild racing of the first combined feature 2 weeks ago. 16 cars and trucks started the feature with Tom Zagorodny leading the first 4 laps in his truck #77. Battles were all over in the field as cars and trucks seemed to have different areas where they are quick. Cody Payne #00 V8 Stock finally gets by Zagorodny on lap 5 after many attempts on the outside. Payne jumped out to a 10 car lead at the halfway point with Zagarodny , Paul Fothergill #33 V8 stock, Barry Watson #45 V8 Stock and #28 Steve Aubertin V8 Stock all in a group scratching and clawing for position. Fothergill closed in on Payne and grabbed the lead on lap 21. As they both pull away from the field, behind them the fighting ensues for all positions. Fothergill takes the win with Payne 2nd, Watson 3rd. Jacob Campbell #44 truck makes a terrific charge in the closing laps to get 4th overall and 1st in Trucks, with his best feature finish of the season. Interesting in the feature, even though the first 3 finishers were V8 Stocks, four out of the six trucks running finished in the top 10. This combined feature certainly great entertainment for the crowd and was a great race for the drivers. What a show……

Final race if the night: was the 2nd Feature for the Transaxle Super Stocks. Kathleen Hosang #16 Camaro leads them to green. Going into turn 2 on the first lap, red comes out due to a five-car mess, with Andrew Ferreira #9 riding up on the wall on the back straight. Several cars went to the pits for damage repair. Only casualty was Super Stock rookie, Derek Moesker #51, with heavy front end damage. All others were able to resume, with Ferreira having to go to the back after going pitside to check for damage. Trevor Collver took over the lead on the restart and then showed just how strong his car was as opened a four-car length lead over Rick Verberne #21, Dodge Challenger. Andrew Ferreira stormed from the back to grab fourth on lap 10. Collver now up to a 10-car lead over Verberne and that’s how it finished. Trevor Collver took the Feature win in a well-deserved victory over a strong second place finish by Rick Vereberne.

Another terrific race event at Delaware Speedway as car counts and active spectatorship continue to grow every week! Don’t miss out, join us Saturday June 15th …… 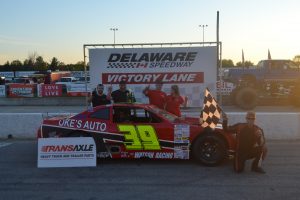 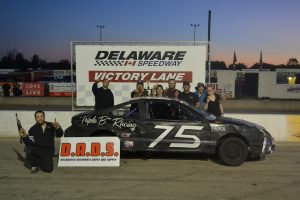 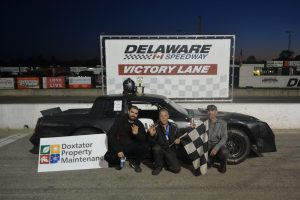 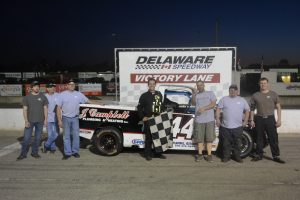 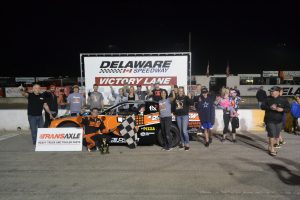